A & E Air Conditioning and Heating LLC / Blog / Furnace / How Do You Know If Your Furnace Has Been Subject To A Safety Recall?

How Do You Know If Your Furnace Has Been Subject To A Safety Recall?

It’s not something that readily crosses our mind, but in 2000 the Consumer Product Safety Commission (CPSC) issued a furnace recall for approximately 140,000 gas-fired home furnaces. These had been sold between 1893 and 1992 under various brand names, including Consolidated, Weatherking, Premier, Sunburst, Goodman, Amana, Bard, Johnstone, American Standard, and a number of private brands. These particular units are relatively easy to spot as they have steel NOx rods located above the burners and were usually installed in attics, though a few were installed in crawl spaces. Reports indicate that over 50 home fires have been attributed to a fault with these boilers, and numerous instances of localized burning within the furnace and areas immediately surrounding them. 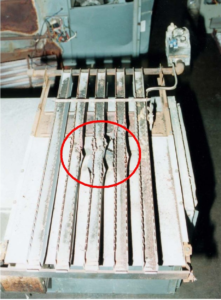 The design of these furnaces was a rapid one and insufficient time was spent testing them before releasing them for sale. The NOx rods had been placed too close to the furnace’s flam and this caused them to overheat. In some instances, that overheating caused the NOx rods to become brittle and likely to crack. The NOx rods are located too close to the firebox and cause the metal to overheat and become very brittle and susceptible to cracks. Once the heat exchanger or expansion joints become compromised, air can either be pushed across the burners causing flame rollout or, more dangerously, it can push the flames downwards, creating a blowtorch effect, which is capable of firing through the base of the furnace and igniting the platform it rests on if it is made of timber or any other flammable material. Beyond being a fire hazard, there was also potential for the release of deadly carbon monoxide.

At the time, there was a class action lawsuit, and the statute of limitations means that becoming part of that class action has long gone. However, that doesn’t solve the problem of discovering if you have a potentially defective furnace. Along with the CPSC, we strongly recommend that if you are unsure about the history of your furnace and unaware of any potential safety risks, get a qualified HVAC engineer to come and have a quick look at your system. The cost is nominal in relation to the peace of mind an inspection can bring you. Get in touch with us and we’ll gladly come out and check that all is well with your furnace.